The 2013 Long Gone Leprechaun “World” Tour has officially kicked off with the show at Falsterbo Horse Show yesterday.

The afternoon continued in a typical leprechaun manner with spontaneous gigs and rehearsals through-out Falsterbo. 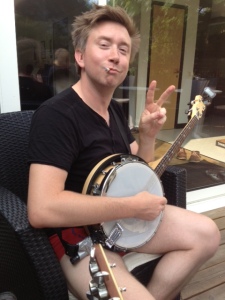 Huge thanks especially to grandma Gustavsson and Jonas , the outcast from Stockholm, for your hospitality, box wine and after eights.

This gig-free sunday, the leprechauns are heading for Helsingborg for a different kind of tour.

Later on we will appear at the Pedersen residence in Mellbystrand. See you there?

The longly anticipated debut album is being printed as we speak (write?). To purchase, please visit an LGL-show close-by. Until then, feel free to listen to the recording right here on www.longgone.se/Music.

In promotion of the new album, the annual “Long Gone Leprechaun “World” Tour” will kick-off this saturday (the 13th). One week of madness and mayhem (and irish).

Spontaneous gigs and mischief through-out Skåne, Blekinge and Småland are guaranteed. Please come by for a beer and a good time.

That’s right, the LGL tour bus has fired up again!

After that, you will find us performing on the big stage at Falsterbo Horse Show, mid-day of July 14th.

The 2011 LGL tour has come to an end. The band would like to thank everyone who has followed the band in real life or online. Stay tuned, there will be video clips and songs posted soon!

LGL rounded up all Irish musicians that could be found at Ullared camping. To our great surprise, not too many showed up. Nevertheless, GeKås will never be the same, and we will surely miss this haven of sweatpants and bargain prices when we head to our next destination – Markaryd!

Here’s a short soundclip of us at Ullared camping:

(Note how Murre (filming) gives a clear and distinctive signal for us to stop playing, right before the clip ends.)

Long Gone Leprechaun would like to welcome you, and themselves, to the LGL blog!

This blog is launched just in time for the 2011 world tour. Stay tuned for updates on the road!

What the heck is this?!

Long Gone Leprechaun is a group of "musicians" from Lund, Sweden, who play and sing traditional Irish music. The band began to form in september 2007, and has since then grown in both numbers and confidence. Beside performances at various pubs in Lund and Skåne, Long Gone Leprechaun can be seen at spontanious gigs in more or less expected places (within and outside the country).